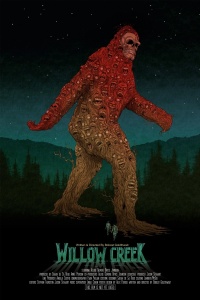 Synopsis: Comedian-turned filmmaker Bobcat Godlthwait (“Shakes the Clown,” “God Bless America”) returns with this horror entry about a would-be Bigfoot expert (Bryce Johnson) who, along with his girlfriend (Alexie Gilmore), gets lost while on a camping trip in Sasquatch’s alleged neighborhood and finds that there is something else out there with them.

What the Critics Are Saying:

“Goldthwait’s humor belies deep-seated insecurities about people unwilling to consider the consequences of their actions, so it was only a matter of time before he made a horror movie. “Willow Creek” conforms to the traditions of the genre with generally satisfying results, but it also manages to build on them.”
–Eric Kohn, Indiewire

“Willow Creek is a shocking mix of comedy and horror that makes Bobcat Goldthwait’s first foray into horror a uniquely rewarding one, giving Bigfoot the proper cinematic feature that such a legendary creature deserves.”
–Matt Donato, We Got This Covered