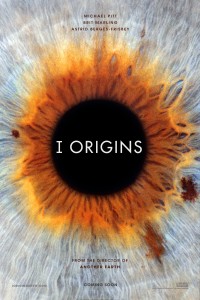 Synopsis: I ORIGINS, the second feature film from writer and director Mike Cahill, tells the story of Dr. Ian Gray (Michael Pitt), a molecular biologist studying the evolution of the eye. He finds his work permeating his life after a brief encounter with an exotic young woman (Astrid Bergès-Frisbey) who slips away from him. As his research continues years later with his lab partner Karen (Brit Marling), they make a stunning scientific discovery that has far reaching implications and complicates both his scientific and spiritual beliefs. Traveling half way around the world, he risks everything he has ever known to validate his theory.

What the Critics Are Saying:
“The fully-formed expression of all of [Mike] Cahill’s ambitious ideas. It also cements him as the real deal; a filmmaker who will hopefully continue to take us to places full of mystery, wonder and awe.”
–Rodrigo Perez, The Playlist

“This sci-fi romantic drama is consistently engaging and unpredictable, growing in emotional impact as its mysteries start to slowly assert themselves.”
–Tim Grierson, Screen International